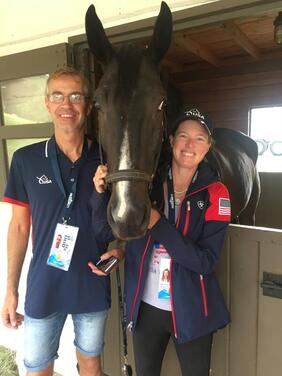 SE Romeo (Romeo) 2009 Westphalian gelding, 17.2 hands
​
Romeo came to us from Germany in February 2017. When we found him, he was unruly and very green, with only some basic dressage training under his belt. After working with him for a couple of months, we introduced Romeo to vaulting in the late spring of 2017. Since that time, he has proven to be a lovely team and individual vaulting horse.  In 2018, Romeo competed at the World Equestrian Games in Tryon, NC. Throughout 2018 and 2019, he also helped one Junior team practice and earn their qualifications stateside to compete in the Junior World Championships in Ermelo, Netherlands.
​
Romeo is also a talented jumper and dressage horse. Angelika recently competed Romeo in the open preliminary division at a recognized horse trial.  This talented horse never ceases to amaze us! 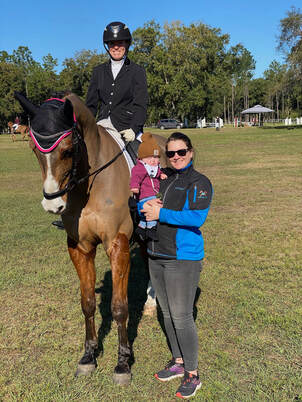 Alwin (Levy) 2007 Rhinelander gelding, 16.3 hh
​
Angelika and Christoph imported Levy in March 2017. Having competed in the 1.40 meter classes in Germany, Levy came to the states an incredibly talented yet anxious jumper. Later that spring, Stephanie Hopkins, a client of Angelika’s, bought Levy and the two began a wonderful partnership. Angelika and Steph have worked together to bring Levy along steadily in the world of eventing. Both riders have seen blue ribbons aboard Levy, a tribute to caring and patient training. In 2019, Angelika and Levy competed at the American Eventing Championships in Lexington, KY at the Training level. Recently, Angelika won a competitive Open Preliminary division at Rocking Horse in Reddick, FL aboard Levy.
​
​In addition to being the beloved mount of Steph, Levy also contributes to the Summit Equestrian business as a part time vaulter. His kind and quiet disposition along with a delightfully comfortable canter makes Levy an excellent vaulting horse. 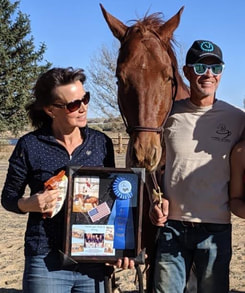 ​Decker MEC or O’Sullivan (Sully) 2009 Hannoverian gelding, 16.2hh
​
Angelika found Sully as a halter-broke three year old.  When Angelika's client, Anja, was looking for a horse, they searched nationwide over the course of several months.  As Sully quickly progressed in his training, it became apparent that the best match for Anja just might be in her backyard.   Since purchasing Sully, Anja has formed a loving partnership with a truly kind and steady mount. Sully jumps, does dressage, vaults, and will even let the kids learn on him, all while maintaining his serene demeanor.

Sully is often used as a vaulting horse for lessons and competition. In 2019, Angelika and Sully also competed at the American Eventing Championships in Lexington, KY at the Novice level. Sully is a true jack-of-all-trades.